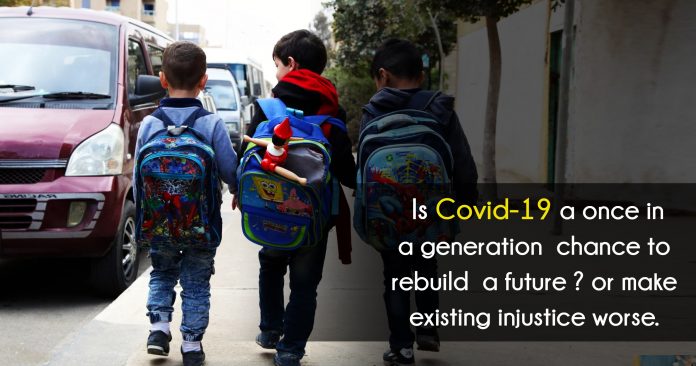 Everything, right from morning walk to late night scrolling, is new, unbelievable and overwhelming – it feels like we are walking into an old recurring dream.

From February, we are refreshing the news developments, not because of a civic sense that news following is essential, but because so much may have happened since the last refresh. These developments are so fast that it’s hard to remember how radical they are.

It’s not the speed and size of what is happening making us dizzy. The fact is that we have grown up hearing that democracies are incapable of making big moves quickly. Look at how historical crises and disasters set the ground for change, often for the better. Like;

But we cannot ignore the fact that crises do send societies down darker avenues. Like;

In all disasters, crises study is conducted by thinkers – some focus more on all things that might go wrong, while others are more optimistic, they frame crises not just in terms of what is lost but also what possibly can be gained.

Since no two disasters are the same, and it’s never just one or the other: both loss and gain coexist, let’s apply this on COVID-19.

According to those who study pandemics know how disasters inflame racial scapegoating and xenophobia – one can check the Wikipedia Page that collate examples from 35 countries, or more, regarding xenophobia and racism that is being inflicted due to Coronavirus.

According to historian Mike Davis, “In a totally rational world, you might assume that an international pandemic would lead to greater internationalism,” in his book about avian flu in 2005, he also explained how pandemics are a perfect example to make global capitalism vulnerable.

One could say that COVID-19 is ramping up production of basic supplies – masks, test kits, respirators – not only for one’s own use, but also for poorer countries, as its all one battle. But who knows, whether it’s a perfect example of rationality or there could be a lot of more demonization and calls for strict isolation. Which will prolly mean more deaths and sufferings globally.

In the whole world, to ban the Coronavirus, using pandemic as a pretext and tighten borders and limit the asylum provision; almost all the Republican officials, media outlets, and even think-tanks are claiming/implying that Covid-19 is a man-made Chinese bioweapon, while on the Chinese hands, it’s the outbreak came to China from American soldiers.

The Hungarian PM said, “We are fighting a two-front war: one front is called migration, and the other one belongs to the coronavirus. There is a logical connection between the two, as both spread with movement.”

For governments and data-fetching companies, like in China, global pandemics are a perfect crisis to monitor their citizens even more closely, in China today, drones search for people not wearing facemasks. Even Germany, Italy, Austria, and Belgium are all using data (form major telecommunications companies) anonymously, to track people’s movement. In South Korea, texts are sent to potentially infected individuals and share their information about their physical location. And in Israel, the national security agency is given the right to access infected individual’s contact information.

What if these measures last forever?

First of all, Coronavirus might open avenues to political progress; according to an American writer Rebecca Solnit, “Ideas that used to be seen as leftwing seem more reasonable to more people. There’s room for change that there wasn’t beforehand. It’s an opening.”

It means that COVID-19 is breaking the political status quo, now the only matter to almost all the states is the protection of their citizens, regardless of ethnicity or any political association. Before the virus, the economies were valuing marketplace solutions, but now, in the last few days, governments spent trillions, even writing cheques directly to citizens – isn’t the great change in the previously learned notion of “the public good?”

Now, the task is not to fight the virus to return to business as usual, as businesses are already in disaster. Instead, the goal is just to fight the virus – and in doing so businesses become something more humane and secure, donating millions to support the cause, many of them stop producing their goods, rather directed towards making protective gears, to reduce the outbreak of the virus.

These optimistic views hold rays of hope that we might begin to see the world differently once the virus is contained. Maybe we continue the practice of viewing our problems as shared, and society becomes more than a mass of individuals fighting and competing against each other.

We wish all the current moments of solidarity to expand into the broader political sphere, so that we can create a world where our shared resources do much more for more people. Solnit says in A Paradise Built in Hell, “We cannot welcome disaster, but we can value the responses, both practical and psychological.”

Right now, the world is in an awful yet strange phase, not because it is changing fast and any one can fall ill at any time, or could already be carrying the virus but because the past few weeks have exposed the fact that no matter how big the challenge is, it can change at any minute.

So, this time we are not watching a movie: we’re writing one, to gather, and we will write until the end.