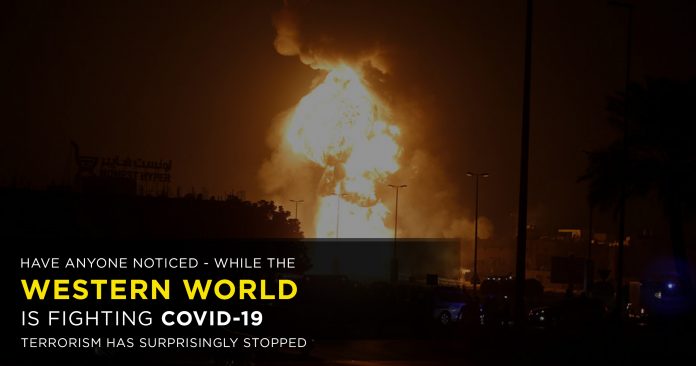 The speedy outbreak of COVID-19 has created its own form of terror, upending daily lives, emptying streets, restaurants and cafes, dividing people from one another, paralyzing economies, and whatnot.

While in the midst of the pandemic, when much of Europe and the United States has been staying home, practicing social distancing, to avoid the pandemic as it had killed more than 23, 000 Americans (120,000+ globally) so far. Have you noticed that there is no terrorist call in any part of the world?

Though it’s great not to have any terrorists’ attacks.

What THEY are saying?

Terrorist groups, especially ISIS and al-Qaeda, blasting online propaganda messages to potential recruits and their followers, hailing that the calamity of the disease is the divine retribution.

This week, the propaganda communiques came from both ISIS and al-Qaeda, claiming that the highly contagious and deadly coronavirus is actually God’s wrath upon the West, and the pandemic itself is a “soldier of Allah.”

One of the ISIS supporters recently said in an online chat room;

“Allah, the Creator, has revealed the brittleness and vulnerability of your material strength. It is now clear for all to see that it was but a deception that could not stand the test of the smallest soldier of God on the face of the earth,”

According to al-Qaeda, COVID-19 has killed thousands of people worldwide but there are relatively few cases in places where Islamist extremist groups have strong holds, such as the Arabian Peninsula, Afghanistan, Pakistan, and the Sahel region, North Africa.

In an official publication al-Naba, ISIS said that the pandemic has killed more Americans than the nearly 3,000 who died in al-Qaeda’s 9/11 attacks – it shows the real picture of all-powerful America.

Back in March, ISIS also issued a travel advisory to its fighters, exclusively for Europe due to the novel coronavirus pandemic and requested fighters to suspend their movement in those regions for terror attacks.

The newsletter even also offered militants advice on how to prevent from being infected from COVID-19, including “cover the mouth when yawning and sneezing” and “wash the hands before dipping them into vessels.” There was also a full-page graphic, citing Islamic texts for “measures to deal with epidemics.”

What THEY are doing?

In Lebanon, the militant group Hezbollah has managed to mobilize 1,500 doctors, 3,000 paramedics and nurses, and enrolled 20,000 more activists to fight the coronavirus.

“It is a real war that we must confront with the mindset of a warrior,” Sayyed Hashem Safieddine- head of Hezbollah’s executive council.

The same group also operates hospitals, providing testing and treatment for COVID-19 for free. And, to contribute to quarantine facilities, the group is renting out hotels s.

Whereas in Afghanistan, the Taliban has disseminated videos on disinfection and also mobilized its fighters to hand out soaps and face masks.

In Hamas, an Islamist group, ruling the Gaza Strip in Israel, is busy in building two massive quarantine facilities.

And, Libyan rebel forces are helping to maintain a curfew from 6 p.m. to 6 a.m. to curb the spread of the virus.

You must be wondering… Why do they care?

If you’re a scholar of, or a reader of armed-group behavior, the actions taken by all of these organizations have not surprised you.

As many of these groups are already providing social services, like education, medical care, and also organizing ways to resolve disputes.

These efforts somehow also reflect the weaker governments in such areas, same is the case with the pandemic response from a government that creates an opportunity for such groups to earn legitimacy and establishes a favorable image in the eyes of the public.

Most often, violent groups take civil actions to gain legitimacy and earn support both from those living under their rule and potential supporters abroad.

Another reason for these groups’ efforts could be the safety and health of their family and friends living in that region – so they must be offering helping hands to keep them protected.

Anyhow, there is always the two sides of a story, same goes to terrorism and all those so-called anti-terrorist measure that the West takes to curb; according to some scholars, these measures actually keep them hooked and motivated.