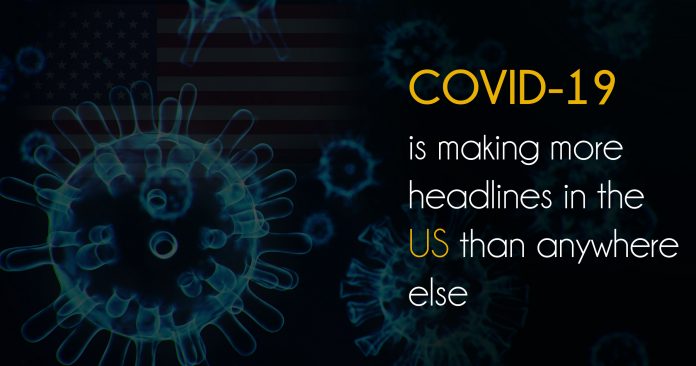 On Thursday, March 2, 2020, the Corona-dubbed world hit a grim watershed, the US observed the highest number of confirmed cases, surpassing Italy, and China.

Interestingly, yesterday, the campaign ‘15 days to slow the spread’ ended across America but citizens asked to extend social distancing for another month as the Covid-19 cases has reached 160,700 with 3000+ deaths.

The most affected/hardest-hit states are New York and New Orleans. In the so called ‘The Big Apple’ a total of 66,497 cases is confirmed with 1,218 fatalities have occurred, with. NYC Health informed that 42% of confirmed cases are in adults ages 18 to 44, and only 17% of them are adults over the age of 65.

It means, ‘adults over 65 are more susceptible to Covid-19’ was a myth!

The new figures of Coronavirus also revealed the shock caused to the economy by the outbreak, 3.2 million people as unemployed registered last week.

The country is struggling with a shortfall of protective equipment for doctors, nurses and technicians, hospital intensive care beds, and ventilators.

So, Who is Responsible?

This is an unfortunate crisis and sadly, an extraordinary failure of so called – President Donald Trump. Americans are suffering and dying out of Covid-19 not just because of themselves but also because of the Trump administration, that failed to act quickly yet decisively to prevent the virus’ spread. The number of Covid-deaths is rising rapidly.

If we compare how China slowed the Corona spread, we can witness the fundamental difference between China and the US. China tried every possibility to contain the spread of the virus – the whole city of Wuhan (later, the whole China) lock downed when the outbreak first started in Wuhan on January 23 and now, they are lifting the lock down in stages. Reluctantly, there are only a few dozen new cases confirmed each day, most of which are introduced from abroad.

On the other hand, the US has not taken the epidemic seriously initially – if Trump eased the ‘stay at home’ guidelines by Easter, nobody can stop the virus to reach millions. Even with active control, the pandemic affected more than 0.7 million of the world’s population and the death toll reached around 38,000, which is expected (according to the Institute for Health Metrics and Evaluation at the University of Washington) to reach by 81,ooo by July deaths.

According to the White House’s coronavirus coordinator, Dr. Deborah Birx, it’s highly predicted that ‘if we do things perfectly’ the death toll of the U.S. Coronavirus will brace up to 200,000. And, without taking any measures, the worst case scenario, U.S. deaths could range between 1.6 to 2.2 million.

The transfer of the virus, prolly from bats to humans was unforeseen, determining the response of the nations in the restrictive policies being taken so far. The East Asian countries started taking hard actions, many, those experienced the 2003 SARS outbreak, had public health teams on alert for the new epidemic. Just two months later, the number of confirmed cases skyrocketed in the US, with 250 cases per million people, higher than China, which was 57 cases per million; Korea, 180; Singapore, 117; Hong Kong, 60; Taiwan, 11; Japan, 11.

Trump bears direct responsibility for unpreparedness and failed response to the outbreak; interestingly, the one who dismantled the pandemic unit at the National Security Council in 2018, slashing the CDC’s epidemic control teams to countries (39 so far), including China. And when the epidemic hit the local ground, all the strategies of the super power downplayed; Trump ignored the pandemic and now, giving repeated false claims. Still, when public health experts are saying that the threat is going to persist for far longer, he is spouting to restart the economy by Easter.

In some parts of the U.S., testing is still far from easy to come by. At a hospital in Queens, potential COVID-19 sufferers waited hours to be tested, many were turned away after the wait.

Apart from Trump’s profound culpability, the for-profit health care system is also responsible for this America’s dismal situation that rakes-up money on disease, not on health. Instead of having a system for the rich, there should be a public health system for all Americans to control new pathogens through testing, contact tracing, and most importantly, quarantine.

Test availability ramped up dramatically over the last week after a delay by the federal government in deploying tests to healthcare providers — it is one of the critical factors in the instant explosion of coronavirus cases in the U.S. The virologist Trevor Bedford informed that 87,000 Americans were infected by the coronavirus in January.

Experts still believe that the U.S. is still not testing enough people to detect the Covid’s true spread

COVID-19 is an American catastrophe, and a slow-motion disaster which, after three months, is coming into view. When its true figures have been measured, the so-called early response of the government will look more outrageous than it already seems. The only flaw with America’s response to the virus is that not enough people are tested for COVID-19.